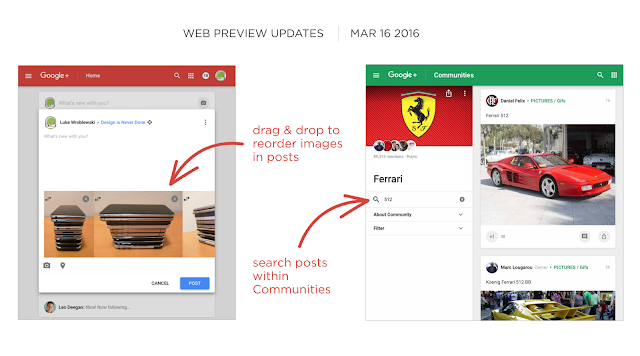 Two small but noteworthy features are brought out in this installment of the Google+ Web Preview updates.

It’s hard to believe it’s already been four months – give or take – since the Google+ Web Preview first saw the light of day. Since that time, updates have been coming in at a relatively fast pace, to the delight of us Google+ users.

Search for Posts Inside a Community

Read that epic post in one of the Communities you’ve joined, but can’t seem to find it again? Don’t worry, as it’s finally possible to search for posts within a Community in the Google+ Web Preview. Just enter your search term in the “Search Community” textbox on the left-hand side under the Community description, and there you go.

There are times when you’d like to swap the positions of some photos that you’re uploading in a post. In this update, you can now do just that by using drag and drop.

In addition, a staggering 220 bugs were fixed and three accessibility issues were addressed, all in an effort to make the final version of the new Google+ Web as bug-free and user-friendly as possible.