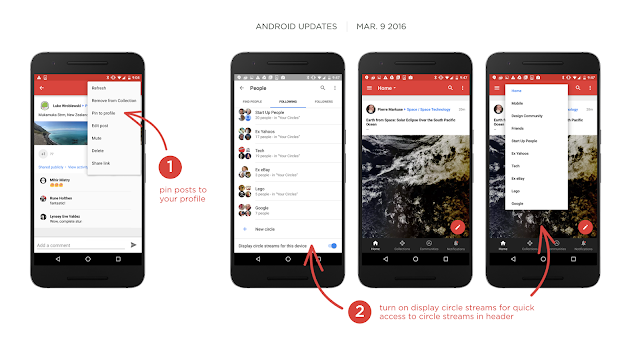 The weekly release cycle for the Google+ Android app continues with the rollout of version 7.4.0, bringing faster access to Circle Streams and the ability to pin posts to your profile.

The most noticeable of the two features is the quicker and more convenient switching between Circle Streams.

Previously, if you wanted to switch from your Home stream to, say, your “Sci & Tech” stream, you had to open the left-hand navigation menu, tap “Circle Streams,” then “Sci & Tech.” Version 7.4.0 brings Circle Stream navigation out into the open by placing a drop-down menu in the header of the G+ home screen, instead of it being hidden away as before.

Having Circle Stream access front-and-centre also removes the need to perform an extra tap, which will certainly save lots of time and effort hunting for that one particular Circle.

You also can now turn on the “Display circle streams for this device” setting directly from the Following screen. I guess this is a server-side update, though, as I haven’t noticed this on my phone up to now.

Pin Posts to your Profile

Ok, this may seem like déjà vu, but this update also returns the ability to pin posts to your profile right in the Android app. After G+’s major overhaul back in November, only the web preview had this functionality, so it’s great to have this neat little feature back.

Alongside these two updates were the squashing of 18 bugs and addressing of 7 accessibility issues.

Of course, if you haven’t received this update on your device and are feeling a little impatient, simply go to APKMirror; download, sideload, and you’ll be enjoying these new goodies in no time.