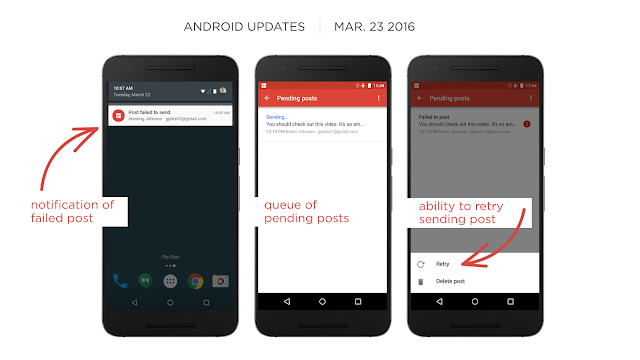 Can’t send that epic post? Now you can (at least keep trying with minimal hassle) in the latest Google+ Android app.

Though version 7.5 of the app mainly consists of updates behind-the-scenes, there is one noticeable new feature.

Not all of us are lucky enough to have super-fast internet speeds. In some parts of the world (including myself here the Philippines), waiting for an app or webpage to load is about as much fun as getting your wisdom teeth pulled out. Fortunately, the coders working on the Google+ Android app have added the ability to retry the sending of failed posts.

Now if you’re uploading a post and it happens to fail at some point along the way, you’ll get a notification, which, when tapped, will take you to a Pending Posts screen. There, you’ll see a queue of your pending posts and tapping on the failed post will bring up the option of either retry sending the post or delete it. Not sure why they added the latter option, but anyway, it’s there in case you need it.

Also, numerous crashing issues on Marshmallow and LG devices have been resolved, and more improvements have been made to Chrome Custom Tabs loading speeds, to make them just that little bit faster.

Aside from this, in the ever-continuing quest to make the app as stable and issue-free as possible, 34 bugs were fixed and 12 accessibility issues were addressed in this update.

One last thing, if you were expecting that Notification Filters will make a comeback this time around, you’ll have to continue holding your breath, as the team is still in the process of resolving some bugs.