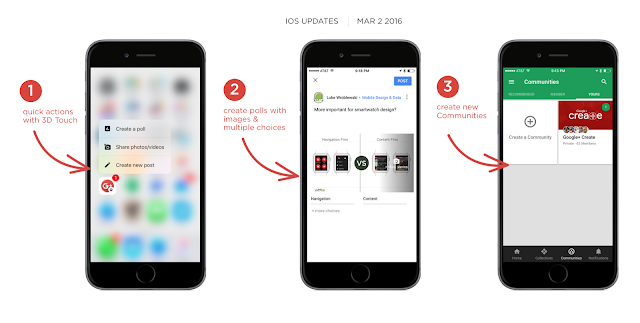 A number of new updates have made their way to the latest version of the Google+ iOS app, including the implementation of 3D Touch

While a lot of the focus has been on the Google+ Android app and its weekly version number bump, its iOS counterpart has also been receiving its share of the update goodies. Let’s find out what’s in store this time round.

One of the most interesting features of last year’s iPhone 6S and 6S Plus was 3D Touch. This detects the amount of pressure being applied to the screen, responding to it with haptic feedback. For example, long-pressing an icon on the home screen will bring up a number of shortcuts – called Quick Actions – which can be selected simply by holding and dragging your finger to the desired action.

Version 5.3.0 brings support to 3D Touch – whenever you tap and hold on the G+ icon, three Quick Actions will pop-up:Create a Poll, Share Photos/Videos, and Create new Post.

Very useful and handy, especially if you don’t have the time to open the full G+ app.

As mentioned above, you can create polls in the iOS version (which is making Android users like me kinda jealous…). Let’s hope the Google+ team can bring back this feature to Android in the near future. Additionally, creating a new Community is now possible, thanks to WebView, and the problem when replying to YouTube videos has been resolved.

Lastly, as part of the continuous user experience improvement of the Google+ iOS app, this update fixes 35 bugs and addresses 9 accessibility issues.