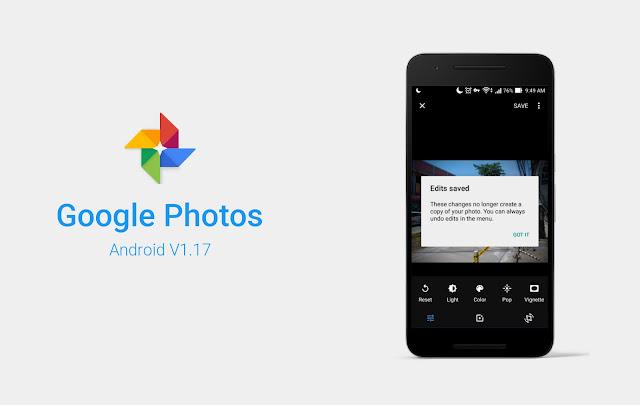 Google Photos v1.17 has been released for Android devices, bringing with it more flexible editing capabilities

This version may not be as noteworthy as last week’s Smarter Albums update, but for those who find themselves editing a photo countless number of times to give it the right look and feel, you’re sure to enjoy this one.

Previously on the Google Photos app, once you edited a photo, a duplicate would automatically be created. This meant if you modified an image multiple times, you’d have multiple copies, and you wouldn’t want to have lots of duplicates cluttering your collection, would you?

In version 1.17, duplicates are gone and instead you now have non-destructive editing. In other words, after you edit an image, you can save it as a new copy without overwriting the original photo. That way, you can easily revert to the unedited version in case you want to give the image a different editing treatment.

Truth be told, I rarely – if ever – use the app for editing my photos; in fact, I’d rather use a more feature-rich and capable image editing app like Snapseed. Maybe they could eventually include some more advanced editing tools (like what the old Google+ Photos app had, perhaps?), because it’s sorely lacking in that department right now.

If you haven’t received the update on your device and can’t wait to get your hands on it, simply head to APKMirror and sideload away.