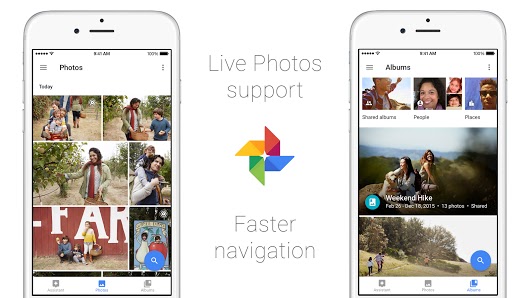 With the latest version of iOS, released about 6 months ago, Apple added Live Photos to the list of features for it’s smartphones. Live Photos captures a photo with sound and video before and after the moment the picture was taken to make your moments “living memories”.

Of course, since Live Photos includes video and sound as a part of the file, it takes up more space than traditional pictures. This means that users will run out of space on their devices and in the 5GB of iCloud storage that Apple gives users. However, now that Google Photos supports the moving images, Apple users can feel free to turn on the feature and no longer worry about running out of space for their pictures.

In addition to the Live Photos support, Google Photos users on iPad will be able to use the app in Split View. That means that you can now use Google Photos side-by-side with other apps supporting Split View on iPad mini 4, iPad Air 2, and iPad Pro. Also, the app now fully supports iPad Pro. Previously, the app would scale up to the iPad Pro’s 12.5 inch screen without displaying in full resolution.

The updates don’t stop there! The Google Photos app on iOS now features faster navigation. The app will now rely less on fewer hamburger menus, meaning that it will take fewer clicks to complete actions. Finally, in order to help with memory usage, the app will reduce the usage of cache when your iPhone or iPad is running low on storage.