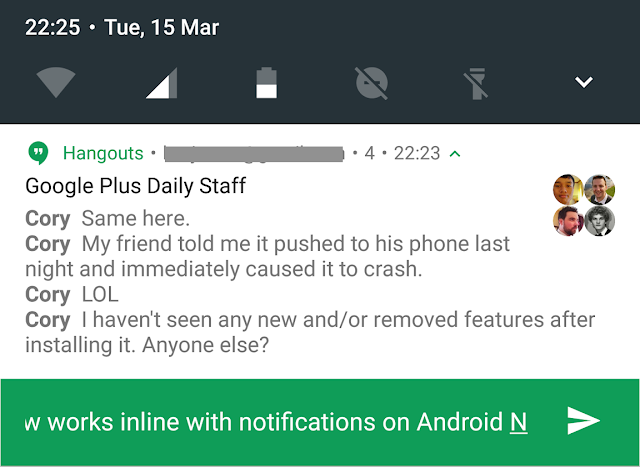 Made the switch to Android N and use Hangouts a lot? You’ll be pleased with this update…

Hangouts, once touted as the messaging app to rule them all, hasn’t been receiving much of the attention as it once had. Google themselves has even encouraged users to install Google Messenger for their SMS and MMS needs. Sure, it’s got the right Material Design UI (which for a long time it didn’t) and in the previous 7.0 release, it finally received Quick Reply.

Nevertheless, Hangouts has been receiving the occasional bump in its version number. Let’s dive in and see what version 8.0 contains!

As you know, Google decided to release a preview version of the upcoming Android version, codenamed N (for Nutella? Or Nougat? We’ll soon enough find out… ;)) a few months earlier than usual, so that by the time the final version is ready, app developers and OEM would’ve had enough time to implement the new features in their apps.

Meanwhile, Direct Reply makes it easier for developers to add in message actions (such as reply, done or delete) directly in the notifications shade, by giving them a standardised API to integrate into their app.

Long story short, If you decided to get in on the Android N action early, you’ll be pleased to know that Hangouts 8.0 now supports both these features.

For the rest of us who haven’t tried out Android N yet, we won’t blame you if all this news about support for Bundled Notifications and Direct Reply is leaving you a little disappointed. However, there is one change you’ll soon notice – the rounding-off of image corners! It’s most likely the Hangouts team implemented this for consistency, considering to the rounded-edged text bubbles.

If you haven’t received the update to Hangouts 8.0 yet, just head over to APKMirror and sideload away.