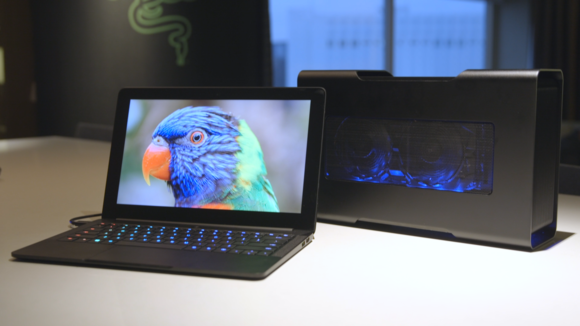 Razer’s adamant that its new Blade Stealth ultrabook is not a gaming machine—and that’s fine! It’s a damned good laptop in its own right, especially for the price. But part of the Stealth’s pitch at CES was that it could be a gaming machine, provided you had a spare graphics card around and were willing to pony up for Razer’s Thunderbolt 3 enabled graphics amplifier, the Razer Core.

…Which made it a bit weird when Razer launched the Blade Stealth all on its lonesome,sans-Core.

But fear not: It’s coming. Razer announced today that the Core is available for preorder, with the first units shipping in April. The price for turning your laptop into a gaming laptop—or your gaming laptop into a better gaming laptop—is steep though: $499, or $399 if you buy (or recently bought) a Razer Blade/Blade Stealth.

Now, about that price: It’s early-adopter tech. The Core is literally the first Thunderbolt 3 graphics amplifier to market, and there’s a good chance that other external GPU docks like Asus’ ROG XG Station 2 will fall in the same price range.

Plus, our own Gordon Ung went hands-on with the Core at CES (watch the video below) and told me it’s “very nicely built” after I regaled him with the cost. The Core is all aluminum, with a sleek slide-locking mechanism and the ability to (at least with supported video cards) seamlessly plug/unplug without necessitating a reboot of the Blade/Blade Stealth. That functionality will be in select AMD cards at launch, thanks to its new Radeon XConnect technology. Razer says Nvidia’s graphics cards, including all GTX 700- and 900-series GPUs, will offer support for the Core at launch as well, though it didn’t say whether GeForce hardware will be hot-unpluggable like Radeon cards. (Which means they probably won’t be.)

Even so, the Core could still be a hard sell in these early stages. That $399/499 price doesn’t include the actual graphics card you’d slot inside, so you’re looking at an additional investment. And you can find Alienware’s proprietary Graphics Amplifier for $200 these days, though the build quality is less impressive and the hardware less future-proof.

I guess the main consideration is whether Thunderbolt 3 graphics amplifiers become standard across the industry. If you’re still using the Core five or ten years down the road, it makes $499 up front seem like less of a big deal—especially if the Core plays nice with your future Alienware laptop or Lenovo laptop or whatever. If we end up with a bunch of semi-proprietary ecosystems though? Or if Thunderbolt 3 is relegated to the sidelines like it has been in the past?

It’s hard to predict. Personally I have my fingers crossed the price comes down. It seems like great technology, but maybe not “Half the cost of the actual Blade Stealth” great.