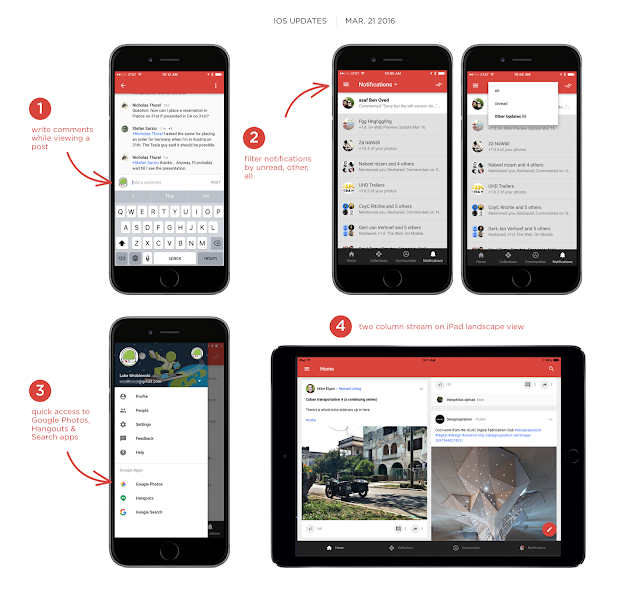 The iOS version of the Google+ app receives a number of new features under its belt.

Coming on the heels of Apple’s announcements a day earlier, the team at Google+ made an announcement of their own with the release of version 5.4 for iOS.

If you’re using the Google+ app on an iPad in landscape mode, you’ll be ecstatic to know that version 5.4.0 finally supports two-column stream browsing. Now you can enjoy more content from your favourite Circles without wasting precious screen real estate!

There are times when you want to switch over to another Google app as quickly and as hassle-free as possible, and using the App Switcher just isn’t fast enough. Not to worry, as this update brings quick access shortcuts to Google Photos, Hangouts and Google Search, available in the left navigation drawer.

You might receive a ton of notifications everyday, whether they be from circles you get notified of every time a new post arrives, comments on posts that you previously made, or people adding you to their circles. With Notification Filters (which first made a brief appearance on the G+ Android app) now on iOS v5.4.0, you can now sift through them all by All, Unread or Other. This will save you lots of time and effort endlessly swiping to read more important notifications.

Other features that made it in this release are inline commenting on posts and the now-dismissible “Notifications disabled” banner.

And, like with every other update, numerous bugs were found and fixed; this time 11 met their demise, in addition to two accessibility issues getting addressed.