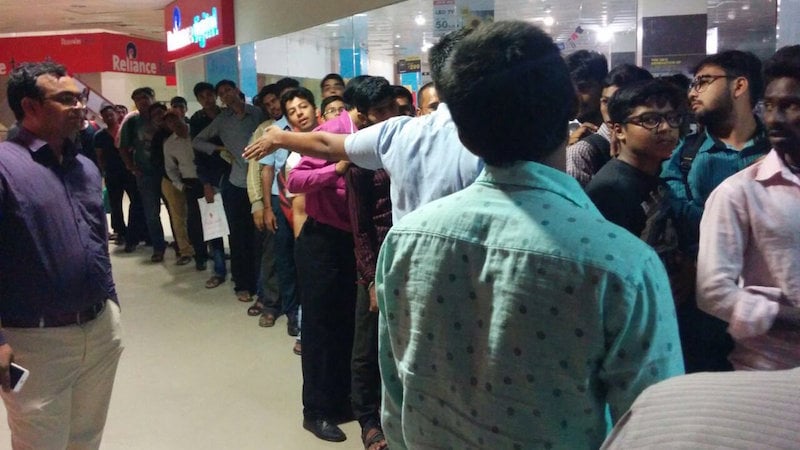 There was been a lot of demand for the Reliance Jio SIM in the virtual world, as has been evident by the number of queries we’ve got on the subject in the last few weeks. This week saw the demand make its presence felt in the real world, with people queuing up in droves at Reliance Digital, Digital Xpress, Digital Xpress Mini stores, and other select retail outlets in the hope of getting their hands on a Reliance Jio SIM.

While calling tariffs in India are among the lowest in the world, mobile data continues to cost a premium, with just 1GB of 3G/ 4G data per month costing over Rs. 250 in most circles on popular operators like Airtel and Vodafone. This makes the demand for a Reliance Jio SIM – which is now available for all 4G phones at select outlets, but only for owners of smartphones by 13 manufacturers at others – understandable, as each Jio SIM comes with 3 months of unlimited calling, SMS, and most importantly, unlimited mobile Internet usage.

The SIM is available free of cost as Reliance Jio is still testing its network, a move that has upset the incumbent telecom operators, but users need to submit their KYC documents. Each Reliance Jio SIM also comes with access to Jio services like JioOnDemand and JioBeats.

So while no one knows what Reliance Jio will charge for 1GB of data post its commercial launch – which is still a “few months” away – people are only more than happy to enjoy free data for 3 months. This explains the mad rush for these SIMs, as evident by these pictures:
Reliance Jio – which is currently testing its network – is expected to do a commercial launch of its network in the ‘coming months’, according to Mukesh Ambani, Reliance Industries Limited Chairman. Ambani is said to have recently met Telecom Secretary JS Deepak to discuss rollout plans for Reliance Jio, which has accused incumbent players of not releasing sufficient interconnection ports during its test run of services.