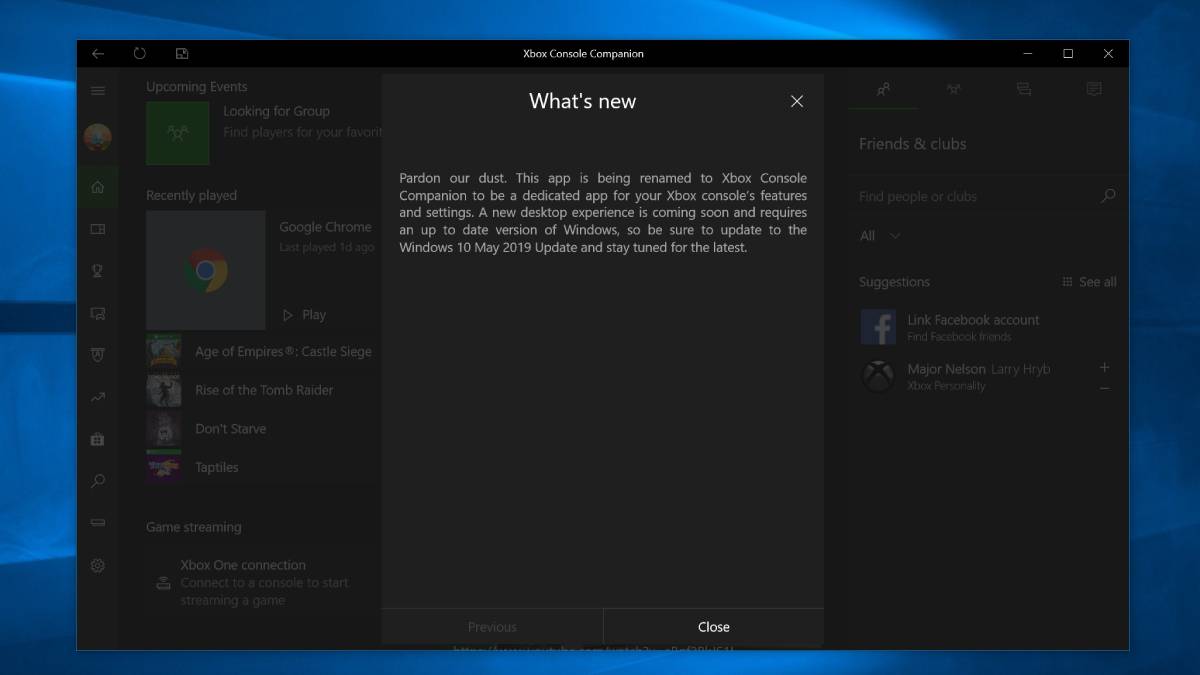 Microsoft has updated its Xbox app for Windows 10 with a new icon and name in preparation for a “new desktop experience” that could be unveiled as soon as the E3 gaming expo next week. While the app is currently no different other than its name, the next update is expected to reinvent it as a dashboard for Xbox console settings and unspecified features. It could also play in to the expected launch of Microsoft’s xCloud online gaming service and allow game streaming between a user’s devices. Similar changes do not seem to have been made to the Xbox apps for iOS and Android, at least not yet.

Users running Windows 10 who update their Microsoft Store apps will see a message saying “Pardon our dust. This app is being renamed to Xbox Console Companion to be a dedicated app for your Xbox console features and settings. A new desktop experience is coming soon and requires an up to date version of Windows, so do be sure to update to the Windows 10 May 2019 Update and stay tuned for the latest”.

The app currently allows users to manage games installed on their Windows 10 PCs, browse games in the Microsoft Store, and manage their Xbox Live profiles. Users can also chat with friends and participate in communities, check and share in-game achievements, manage stills and video clips recorded using the console’s DVR feature, and even stream games from an Xbox One console to a Windows 10 PC.

Microsoft will be hosting a press conference on June 9 (1:30am IST on June 10) at the E3 2019 gaming expo, at which it could unveil the promised new desktop experience as well as shed more light on the xCloud streaming service. The company has previously said that it will begin xCloud trials in 2019.

The company also recently overhauled the Windows 10 Game Bar which now has multiple tools including PC resource monitors, customisable widgets, and broadcast and game capture controls. It also now offers several of the same features as the Xbox app including social media integration. The Game Bar has gained cross-platform voice and text chatting with friends which is synchronised across Xbox devices, as well as multiplayer team management. It also now features Spotify music controls as part of Microsoft’s efforts to improve gaming on Windows 10. These features could be removed from the Xbox Console Companion app as it is refocused.