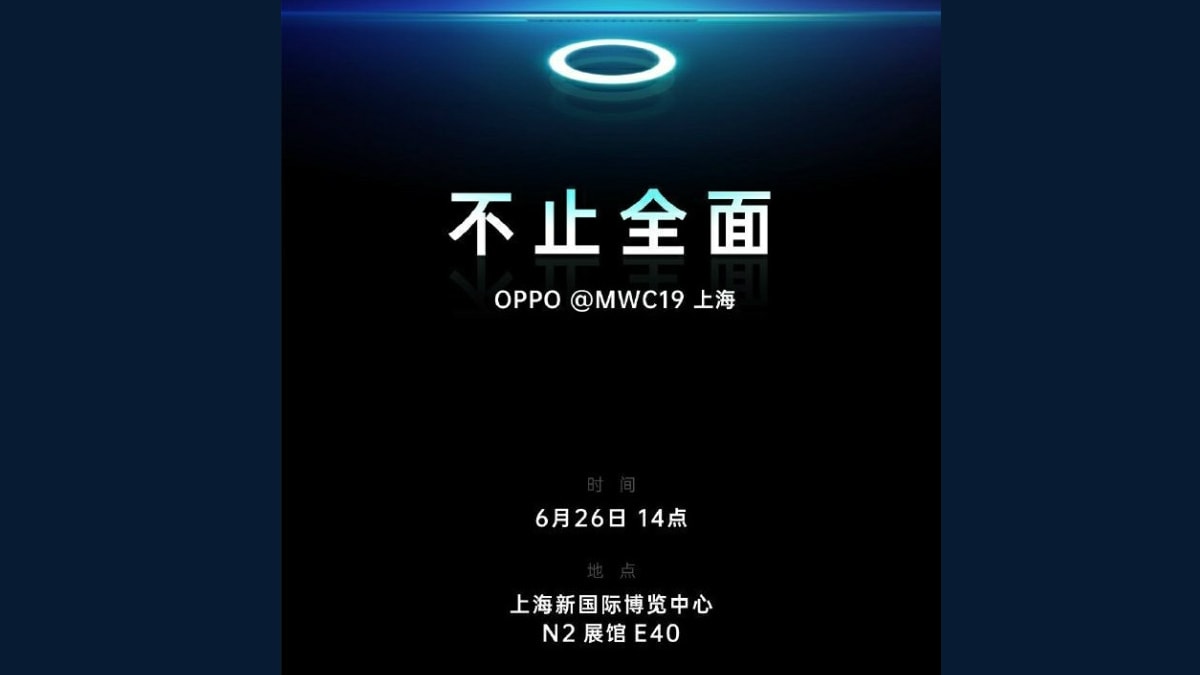 Oppo recently teased its under-display selfie camera technology, and now the company is reportedly sending out media invites to Chinese media representatives hinting that a formal announcement is slated to happen on June 26 i.e., next week. Oppo is set to host an event at MWC Shanghai, and the invite reveals that the event will begin at 2pm local time at Oppo’s booth. MWC Shanghai is slated to kick off on June 26 and go on till June 29.

Oppo has sent out media invites to Chinese media representatives, SparrowNews reports, and the invite has all the booth details, along with time and date of the launch event. While it doesn’t explicitly state that the launch will be of the under-display selfie camera technology, the invite roughly translates to ‘Even more surface’, thereby hinting at it. The invite poster shows an outline of a smartphone, and another circular ring that should be hiding the selfie camera underneath the smartphone display.

Earlier this month, Oppo VP Brian Shen shared a short video showcasing a notch-less smartphone with the front camera optics embedded underneath the display. It is not known at the moment when this technology will be ready for mainstream use.

Xiaomi and Honor have also confirmed that they are working on a similar under-display selfie camera technology. Xiaomi Senior VP Wang Xiang even detailed on how this technology will work. The company is working on a custom display that features a small transparent area made of a special low-reflective glass with high transmittance. When the selfie camera is activated, the display area over the camera lens becomes transparent in an instant, allowing light to enter.

This could be the ultimate solution for a Full Screen Display coexisting with a front camera. When not in camera mode, the transparent display works like a normal one, allowing content to be displayed in full. The display embedded camera combo allows more light into the lens, resulting in clearer and crisper selfies than the hole-punch solution. Oppo hasn’t detailed how it managed to achieve this under-display selfie camera solution, but it should provide more information at its event at MWC Shanghai next week.