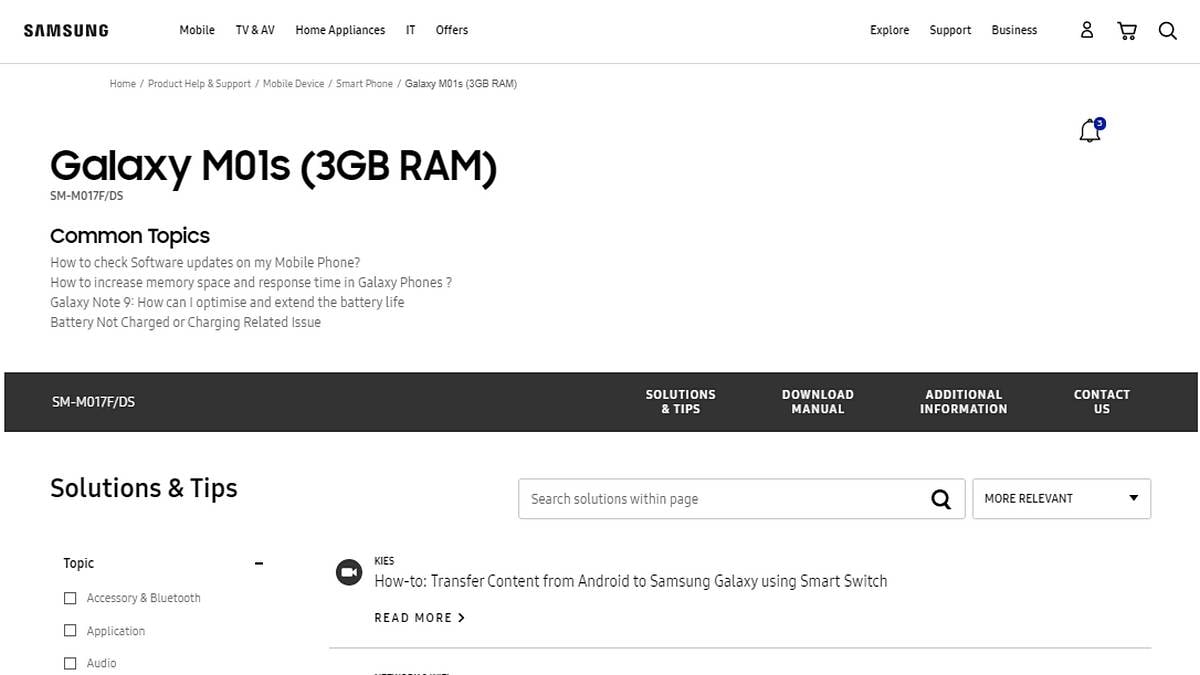 Samsung Galaxy M01s may be closer to launch than previously expected. The phone has got its dedicated support page on Samsung’s India website and the listing comes with model number SM-M017F/DS. It also mentions the name as “Galaxy M01s (3GB RAM)” which suggests that there will be a different RAM variant as well, along with a 3GB RAM variant. The support page not only confirms the existence of a Galaxy M01s but also links it to the model number SM-M017F/DS that has been previously spotted on various certification websites.

The Samsung India support page for the Galaxy M01s mentions the model number SM-M017F/DS where the ‘DS’ stands for dual-SIM. The phone will have a 3GB RAM variant, along with the rumoured 2GB RAM variant that was reportedly spotted in a Google Play Console listing. The support page for the Samsung Galaxy M01s does not reveal any other details and Samsung has not shared pricing and availability for the upcoming phone, but the existence of the page suggests that the company is nearly ready to launch the phone in India.

A recent leak suggested that the Samsung Galaxy M01s may be a rebranded version of the Samsung Galaxy A10s from last year. The phone was reportedly spotted in a Google Play Console listing with the name “Samsung Galaxy M01sGalaxyA10s” and some specifications. It showed the presence of an octa-core MediaTek MT6762 (Helio P22) SoC, PowerVR GE8320 GPU, 2GB of RAM, and a 720×1,520 pixels display with 280ppi pixel density. Additionally, the TÜV Rheinland’s website tipped the presence of 4,000mAh battery while an older report hinted a 32GB of onboard storage. It is possible that there will be other storage options as well, now that multiple RAM options have been hinted.